Andrew Zarian is the founder and President of the highly successful GFQ (Guys from Queens) Network media empire . Stepping Out Magazine dubbed Andrew “The King of New Media” as he currently hosts over seven internet broadcasts and is currently reshaping how we perceive and view internet broadcasting.

Andrew Zarian understands the importance of taking a chance at the right moment. In 2009 the Queens born native’s life was at a major turning point. The ink had barely dried on his marriage license or on the contract for his newly bought home when he was laid off from his information technology job. “I could go into a 9-to-5, I could often another business or I could just do something crazy… I chose crazy” said Andrew Zarian in 2010 interview with the Astoria Times. Instead of returning to a daily grind, Andrew turned his sights over to his passion for technology and broadcasting and created his very own Internet broadcasting network
with himself at the helm. Using his natural talent for broadcasting he constructed the GFQ Network which now consists of over a dozen shows and over 3.5 million viewers and listeners.  With Andrew spearheading the movement towards shaping the future of media, Andy Wombwell, program director of Stickam.com says this of Andrew’s creation; “The GFQ Network is a leading example of the potential of internet broadcasting. With its high quality production value and content, GFQ has broken traditional stereotypes associated with broadcasting on the web. ”Andrew firmly believes that the future of entertainment lies in internet broadcasting along with the casual flow of information by way of the electronic conversation.

Andrew Zarian can be seen on a number of shows each week. For more information please visit guysfromqueens.com 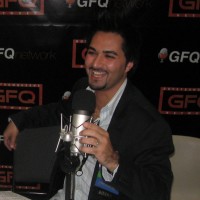