Chris has had a passion for being behind the microphone since he was 8 years old.   Inspired by 1970's Chicago radio personalities  John Landecker, Larry Lujack and Steve Dahl, Chris went on to host his own entertainment-talk radio show on Downers Grove, IL high school radio station WDGC-FM between 1980-1984.     Today, he has partnered up with his daughter Ally in a new podcast series that fosters the same spirit of the original high school show.   Chris has recently formed SmorgShow Productions which offers voiceover recording services.

The SmorgShow Podcast can be heard on iTunes and at SmorgShow.com.

Short for “Smorgasbord”, suggesting a variety of things, the SmorgShow Podcast originates from the Chris and Dave Smorgasbord radio show which aired on suburban Chicago high school radio station WDGC-FM between 1982-1984.

Three decades later, Chris resurrects the Smorgasbord brand name and is teamed up with his daughter, Ally in a new weekly podcast series. 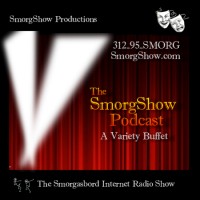